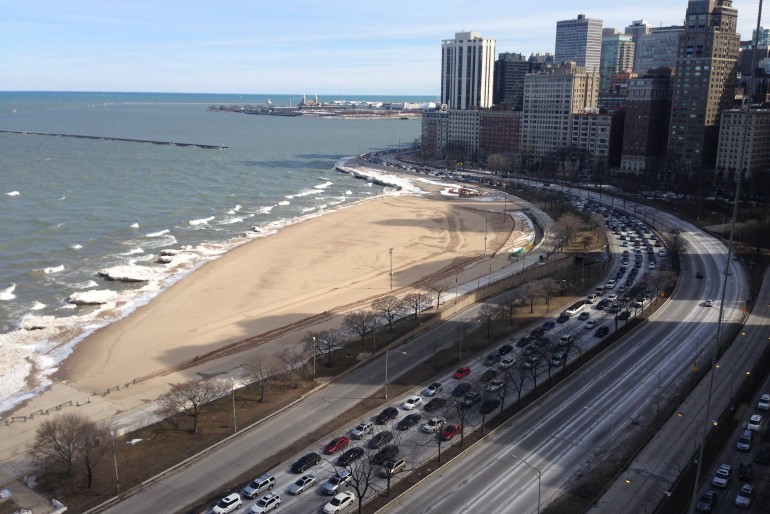 Sirens are blaring. Dozens of police cars zoom down Chicago’s iconic Lake Shore Drive. A car has crashed. Guns are out. Stalled bumper to bumper, thousands of cars are in the trail of a multi-interstate police chase.

Sunday’s police chase of a murder suspect from Georgia sent the media in a frenzy and spiked public interest. Just like a chase scene in an action film, the drama of a police standoff held Chicago in suspense – and this isn’t the first time in Chicago’s history. This week, The Chicago Lifestyle partners with 312GO, an app sharing Chicago’s interesting facts and stories as you cross paths with their historical locations, to bring you the details of the top 3 police chases and manhunts in Chicago’s history.

On Sunday, March 16, suspect Joseph Andrew Felton, Jr. sped his car from Harvey, IL through several inter-state highways, all the way to Lincoln Park, with police trailing. Wanted for the murder of his wife, Sheray Felton, the suspect crashed his car near the Lake Shore Drive Fullerton exit, and was surrounded by police within minutes. Refusing to leave his car, the resulting standoff frustrated thousands of drivers caught in the 8-hour traffic pileup. Felton ultimately exited his vehicle once the police used a flash grenade and was taken to the hospital. Click to read more from DNAinfo Chicago.

Drucci was a life-long mobster in Bugs Moran’s north-side gang.  After blowing up a safe in a teashop on August 31, 1922, he found himself in a police car chase.  Drucci approached the Michigan Avenue Bridge as it was being raised, but not wanting to stop, he drove through the gates and jumped the open gap some 50 feet above the river.  Amazingly, the tailing squad car followed.  Now on the south-side of the river, the chase turned to foot, and Drucci was apprehended about a block from the bridge.

After robbing over 60 bars in 18 months, Carpenter was perhaps Chicago’s most-wanted fugitive.  The chase escalated when he was spotted by an off-duty officer inside the former Biltmore Theatre in Wicker Park (2046 W. Division) on August 17, 1955.  Carpenter shot the officer in the chest, and escaped through the rear of the theater.  He then broke into a nearby home and kept a family of four hostage for 23 hours.  The house was surrounded by police and a helicopter hovered overhead, when Carpenter attempted to escape out a second-story window.  With nowhere to run, Carpenter was arrested as the crowd chanted for his capture.

Dillinger was the nation’s most notorious Depression-era bank robber.  He and his gang heisted over two-dozen banks and four police stations throughout the Midwest.  He managed to evade police for almost a year, until his date tipped off his whereabouts on July 22, 1934.   While Dillinger attended a movie at the Biograph Theater in Lincoln Park (2433 N. Lincoln), a fleet of FBI agents awaited his exit.  As he emerged from the theatre, he saw the agents and took off running down a nearby alley.  Before he could escape, he was shot three times and killed.

Want a personalized walking or running tour as you’re jetting around to your favorite spots in Chicago? Plug in your headphones and pull up the 312GO app on your phone – and just listen in! No need to turn off your running playlist, 312GO will interject when you’re located at a hot spot where an interesting piece of Chicago’s history occurred. This allows you to take your own path and carry the tour guide with you.

You’ll become a trivia expert when you access more than 3000 Chicago tidbits gathered by local researchers, writers and guides. Want to hear more about restaurants, nightlife and urban activities, but less about architecture and public art? You can pre-select which categories pique your interest the most, for a truly customized tour to delight locals and tourists alike.

No posts were found for display