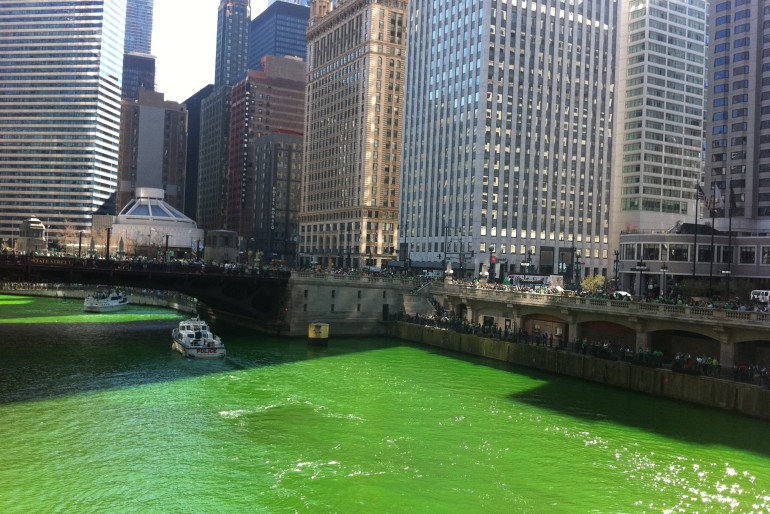 If you’re like most Chicagoans, then every year St. Patrick’s Day isn’t just your average “holiday.” In Chicago it is a huge celebration with good times, good friends and most importantly good food.  Chicagoans go all out when it comes to this festive green holiday.

Here’s how to catch the St. Patrick’s Day spirit:

1. We dye our emerald river green!! In true Chicago fashion, every year around 40 pounds of eco-friendly dye is dumped into the Chicago River and it lasts around 4-5 hours. The dyeing starts at 9:30 a.m. and is located at the corner of Columbus and Wacker Drive.  The dyeing of the river has been a beloved tradition for about 50 years, and it draws in crowds that also follow the parade around the city.

2. We have TWO parades! We have a parade on the north side of the city which usually resides on a Saturday (this year March 14) so that families and tourists can come out and enjoy the festivities. The downtown parade starts at 12 p.m. at Columbus and Balbo. The parade proceeds north on Columbus and the viewing area is in front of Buckingham Fountain.

The Second Parade that takes place in Chicago is the South Side Irish Parade. It is a family friendly event which is supported by the surrounding community.  It is said that this parade is one of the biggest Irish Heritage celebrations outside of Dublin. This year it is on Sunday March 15. It starts at 12 p.m. and is located on Western Avenue between 103rd and 115th Streets.

3. We have the best food! As Chicago is known for being a foodie city, there are many restaurants around the city that make authentic Irish cuisine. Several locations include McNamara’s on Irving Park and The Abbey Pub just off of Elston Ave. on Grace St.

4. We have numerous parties around the city! In Chicago, we do St. Patrick’s Day pretty big. Whether this means going to the parade, or starting the fun bright and early at 8 a.m. with a pub crawl, Chicagoans are very diverse on what they like to enjoy throughout the city. Most restaurants in the city take part in the St. Patrick’s Day festivities, whether it is signing up to be a stop on a bar crawl, or having green beer specials, this is one holiday that bars and restaurants enjoy.

Have a great St. Patrick’s Day!