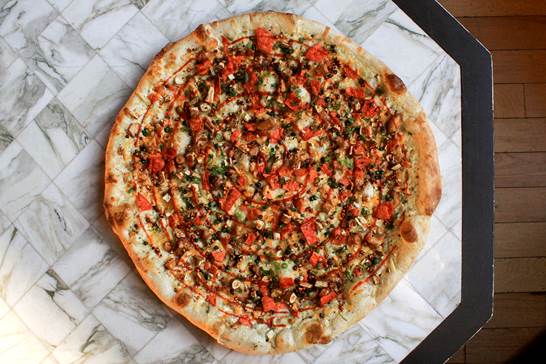 The Chicago Comic & Entertainment Expo is here again from April 24-26, celebrating pop culture by showcasing exhibitions and panels from the creative geniuses behind popular comics, TV shows, and movies. C2E2 also hosts autograph signings and special screenings for fans exclusively from the creators of some their favorite entertainment. Tickets for 1-day or 3-day admission are available now on C2E2.com, but if you can’t make the event, four different restaurants across Chicago have partnered with C2E2 to highlight pop culture phenomenons through gastronomical food!

Dimo’s Pizza, the extremely popular pizza joint known for crazy toppings like Chicken & Waffles and S’Mores, created a concoction called “Too Many Cooks,” consisting of cool ranch Doritos, chicken nuggets and Combo’s, all tossed in Hi-C’s Ecto-Cooler drink and topped with Spicy Pop Rocks to pay tribute to 80’s junk food. This pizza will be available at their Wrigleyville and Wicker Park locations from April 20th-26th, so make sure to stop by and grab a slice!

At the Hyatt Regency McCormick Place, M/X and POI bars are offering 7 different cocktails inspired by superheroes, like the Damsel in Distress, which is a mix of Amaretto & Ketel One with Cranberry Juice and Orange Juice, as well as two different entree options. The first is a grass fed burger with an egg and pepper relish in between a pretzel bun, and the second is a sandwich with bacon, gouda & brie cheeses, onions, and a tomato-basil sauce on long white bread.

Revolution Brewery/Pub is bringing back their famous Galaxy Hero IPA this month, along with the Galaxy Burger, which is made with Tang (that yummy orange drink we all used to drink when we were kids) on a black bun.

Galaxy Hero will also be served in the Hard Rock Hotel Chicago, Chucks: A Kerry Simon Kitchen along with the Iron Chef Burger, a beef burger with sharp cheddar cheese and red onion jam. For dinner, you can order the burger doubled. These will be available until the end of April on special, and at a discount for C2E2 fans.

Make sure to snag these one-of-a-kind creations before April is over, and enjoy the C2E2 Expo this weekend!