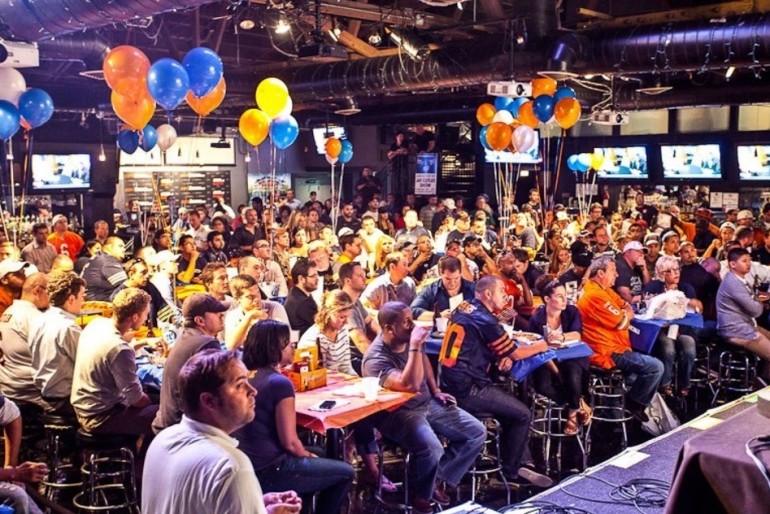 Chicago, let’s face it, our beloved Bears aren’t doing as hot as we’d like them to this season. Once we thought we recovered from that embarrassing home loss to the Green Bay Packers, a few weeks later we still couldn’t do it at home against the Miami Dolphins. The good news is you don’t have to hang your head alone. Chicago has hundreds of places all around the city where you can find fellow fans complaining about Cutler’s lack of ability and the non-existent defense. We’ve narrowed down the places to go for the pre-game activities, to get the cheapest food and drinks, and of course to experience that “football season” feeling.

For the fans that love football season because it involves beer, beer and more beer, Vice District Brewing Company  is a new brewery in the South Loop near Soldier Field and will fill you up with just about any craft beer you’d like. The taproom opens at 11 a.m. on Bears game days.

Get this. Not only can you kick off the game at O’Donovan’s but they also have a $10 ticket for a round trip shuttle from the North Center to Soldier Field that includes beverages on board. A low-key and mellow beer garden is tucked away in the back that is also heated and enclosed once it starts to get cold.

The mother of all bars with LED screens puts the ball into the end-zone for this everyday, family-friendly bar and grill. The beer options are through the roof and the staff is on point. Just what you need to stay sane during Jay Cutler’s horrible passes.

Public House offers a more chic way to Sunday Funday during a Bears game. Enjoy gourmet appetizers to go along with an endless beer list (the taps are actually built into the walls) with names you’ve never heard of, served in glasses you’ve never seen before. Definitely a place to bring a Bears game date to.

McGee’s is the definition of a loud, crowded, drunken, chaotic sports bar. Beer will be spilled on you, fights will start and you’ll spend a long time waiting in line for the bathroom. But you’ll have a heck of a time.

Joe’s is one of the most popular places to catch any Chicago game. However, the atmosphere is terrific here on Sundays because just about everyone has a Bears jersey on. The food is Chicago style, the TVs play Chicago sports, the people are from Chicago, all Chicago, all the time.

True Bear fans will understand why this place is No. 1. Although it is a classier way to enjoy the game, there is no better way to soak in the history of “Da Bears” and reminisce the years they were a great team.